5 Haunted Roads in the United States

Have you ever been on a small road with a feeling of discomfort where you think you really should have taken another road? This discomfort at the bottom of the belly that says to you: “Turn back, if you continue, it will happen something bad …” Then you start suspecting that someone, or something, will come out of nowhere and jump on the car, and you check in your mirrors every 5 seconds to make sure you’re alone in the car…

Me, it happens to me often … it is necessary to say that in France, and more particularly in the South, where I live, one has many legends on the road, in particular, that of the White Lady! But that sensation also happened to me in Florida, when I drove alone, at night, on a road that crossed some sleepy little villages … My mind was sorely troubled by the many movies and TV shows I’ve watched since my childhood! Or maybe it was something else?

Every little American town has its own local legend of haunted house and ghosts, which are told and modified, like this ghost car that follows you for miles, or that spirit that suddenly appears in your retro … What makes these Such extraordinary stories are that you can feel them and imagine them clearly, without even having experienced them! In your head, you see yourself already driving alone on a dark road, waiting for a paranormal event … And even if it will surely happen nothing, it is your imagination that raises the adrenaline, as in any good story of ghosts!

So sit back, relax, I’ll tell you some stories about the most haunted roads in the United States.

It is surely one of the most frightening local legends: that of the ghost hitchhiker who is violently scared to drivers on Route 44, east of Providence for about 30 years. He is described as a red man with a beard, about 1m80, and very dark eyes, lifeless … It fits perfectly to the profile of a man who died years ago in a car accident on this road! The locals warn the drivers who would like to take it hitchhiking because those who did it have lived experiences quite … strange. A woman reports that she met the ghost, and when she stopped to open the door, he disappeared, and the engine of his car mysteriously stopped. In the freezing cold of Massachusetts, she continued to hear her devilish laugh for several minutes after he disappeared…

Many people in the village will tell you to never drive on Route 44 if your car is not full because one of the “simplest” ways to see this ghost is to lift your head and see it staring at you. in your rearview mirror, sitting in the back seat! And just when you see it, that’s when it disappears but your radio will oddly start scanning all the stations, with the volume so high that your car will start to tremble … And through the sound of the radio stations, you will continue to hear his evil laughter. So, we’re having a little road trip to New England?

What could be scary when we linger in the most haunted cemetery in Illinois? Many things! If you’re out in the north of Chicago and drive past White Cemetery in Barrington, continue your way…

Here, the spirits are known to walk in the cemetery since the 1820s. The inhabitants of the village and even the police very often report objects that disappear or float: people, cars and even a ghost house that would have burned the early 1900s in strange circumstances. Legend has it that if you see the house, do not go inside because when it disappears into the mist, you will disappear with it … Forever!

It is also said that there is often a woman with a lantern, who apparently seeks a means of locomotion before disappearing quickly between the gravestones. Apparent apparitions lurking behind the trees or around the cemetery are also commonplace at White Cemetery.

So if you ride on Cuba Road, and you meet someone on the road, especially do not propose to ride with you … There is a good chance that this person is already on the other side and that she has only one desire: to bring you with her!

If you are sensitive to stories between brothers and sisters, then move away from this road (and this story) that houses one of the darkest legends in the United States … The story is one hour south of Omaha to Nebraska City more exactly … If you ask any of the 7000 inhabitants of the village, they will tell you to abstain from Seven Sisters Road!

Legend has it that almost 100 years ago a brother and his seven sisters lived in the hills outside the city. For some reason so far unknown, the brother came home one night with a feeling of madness in him and toxic thoughts clogging his mind. Sinking more and more into madness, he was no longer able to hold back the darkness and committed an act absolutely unimaginable: he dragged each of his sisters up a nearby hill and hanged them all…

Although no one knows what happened to the brother, locals warn visitors that really strange things can happen on this road that follows these 7 small hills. Many courageous people who have dared to brave the legend say that the battery of their car emptied itself, that their engine began to cough and the headlights go out like a warning that they are not welcome right here.

If you insist and still want to park your car on the side of the road for long enough, you may hear the screaming of the seven sisters hanging near you…

This story takes place on a tiny road south of the town of Erie, Pennsylvania, on a covered bridge built around 1868. Straddling Elk Creek, the Gudgeonville Bridge took its first life there a little more than 100 years old.

Legend has it that a farmer named Obadiah Will delivered a donkey to a nearby farm when the animal started to go crazy … He drove Obadiah to the entrance of the bridge but stopped. , without wanting to cross. Frustrated and angry, the farmer tried to advance the donkey several times, without any success.

Unable to turn back or advance on the very narrow bridge, he became so angry that he shot the poor animal on the spot with anger. After violently taking his life off the donkey, he decided to bury him along the river below the bridge.

Check This Out: 5 Places to See in Paris

Years later, a little girl was playing along with the Devils Backbone, the name of the cliffs over the river, when she fell and drowned in the white water that passed under the bridge. When his family went looking for him, they found only his left shoe…

Today the locals say that if you park near the  Gudgeonville Bridge covered bridge (today unfortunately destroyed) and open the window, you will hear the donkey’s hooves getting closer to you … You may see also a little girl wander along the river, with only one shoe … Do not linger too much, because she could try to sting your shoe, with your leg still inside!

Be warned right away: if you are in Thornton and want to go for an evening walk, let someone know where you are going, or even better, stay home! About 20 minutes north of Denver, in the hills outside Golden Gate Canyon State Park, lies this small Colorado town.

The story goes that one night; a jogger was jogging alone on Riverdale Road, which leads to a very popular cliff with a magnificent view of the lights of the city. Suddenly, from nowhere, a car appeared in the night and overthrew the runner, who was left to die on the edge of the road.

Never angry and seeking revenge, the runner always haunts this little road, looking for his killer in all cars that pass. He especially likes to scare people who park up the hill, now called Jogger’s Hill, to admire the lights.

Legend has it that if you turn off your engine and your lights, he will think you are the one who knocked him down. Many people say that they heard footsteps running towards them followed by violent fists on the sides of the car before seeing traces of their hands on the windows as if the runner was trying to look at them. Inside your car…

No seriously, please, do not go! 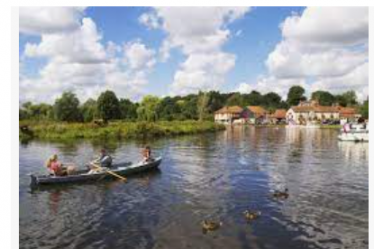